Another Quicksilver back in the air!‏ 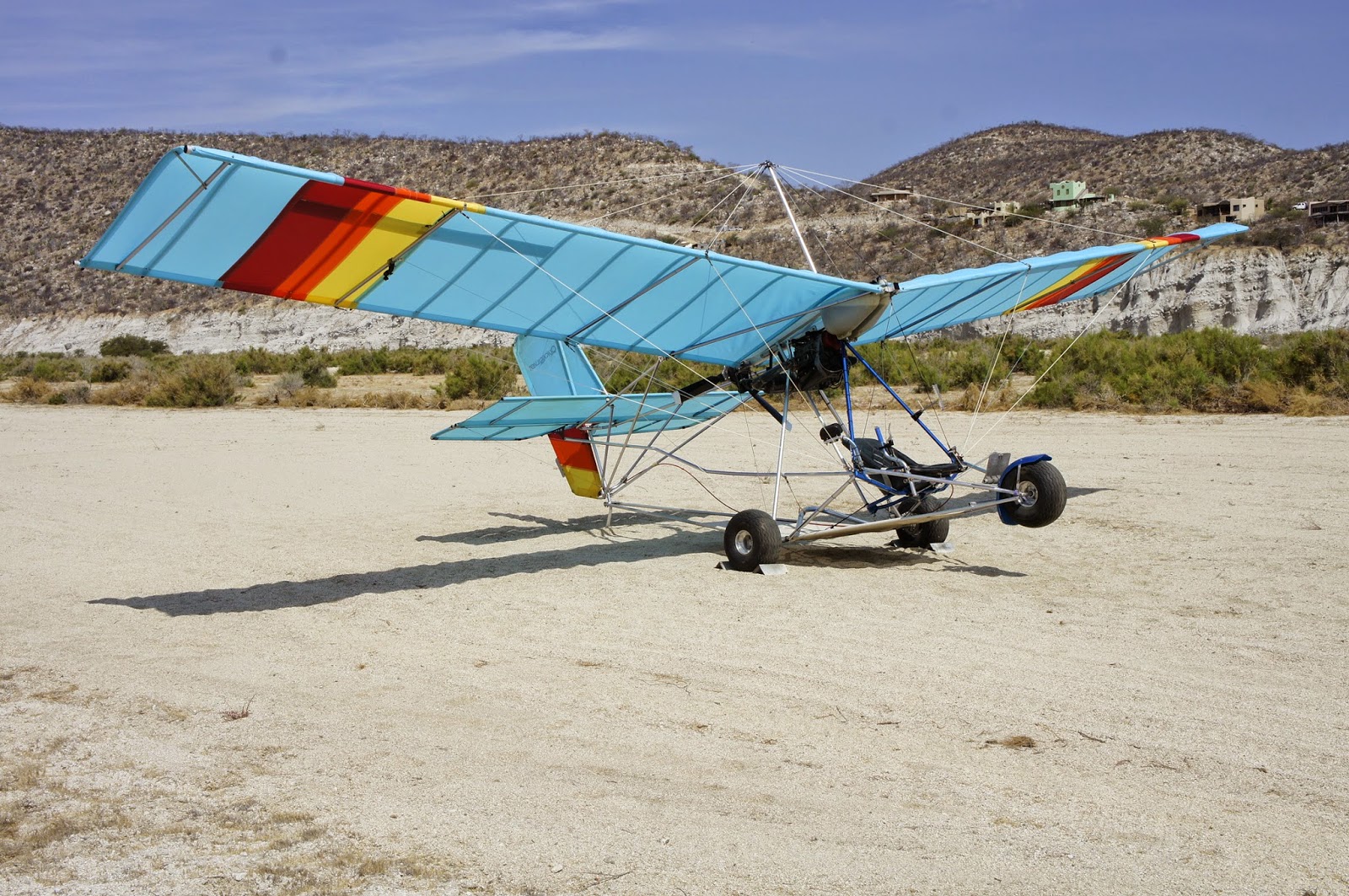 A letter from Mark Higginson

I just had my first solo flight in my restored 1981 Quicksilver MX. I wrote a short little note for my Quicksilver Ultralight Owners Yahoo Group:

Well, I may now officially have the record for owning a Quicksilver MX without flying it. I bought a 1981 “basket case” MX in 1986. I didn’t know anything about ultralights at the time but saw a brand new MX hanging up in the ceiling in a sporting goods store in Southern California. I fell in love. Couldn’t afford a new one so found mine used in the classifieds. Had to drive 400 miles round trip to get her. I disassembled her to get her into my truck with the wings on top. The sails shredded on the way back home. My first lesson in what to look for in a used ultralight. She originally had the Cayuna 440 and after all my research she now sports a Rotax DCDI 503. I have spent so much time and money on the project when I could probably figgered out a way to finance a new one and been flying all these years. My MX was most of the time a dream on the backburner since I have lived a very full life filled with many adventures and other projects that seemed more important at the time…….


So yesterday, 28 years later, my MX is finished. She has been christened “Tinkerbell” since I’m one of the “Lost Boys” and live where I believe is Never Never Land, (Baja California, Mexico). If you’ve ever been here you know what I mean. It has been an epic adventure trying these last years to find parts and information down here to restore “Tink” to flight status.


I had taken two lessons about six years ago from an instructor in So Cal. Just this year did I find out he had died in an ultralight crash a couple years ago. I was limited in time and money and he was willing to give me the condensed version of flight school. I studied everything I could find on ultralight flying, bought all the books. I even have the original Eipper Quicksilver flight course. I did the Microsoft Flight Simulator thang complete with adding an MX to the planes I could fly. I studied everything I could find on the internet and joined this group many years ago to take advantage of the wealth of knowledge from all of you who have gone before me into the sky with the Quicksilvers. Gawd only knows how many times I’ve had to call Bever and Mark with questions.


Part of my internet research turned up an article written with an instructors view of how to solo an MX. After all my research, his version, condensed down from many years of his and his fellow instructors experiences were to be my guide to soloing. After making a 1000ft runway in the sand/dirt arroyo next to my home I followed his instructions about starting with slow taxis and progressing to fast taxis with S turns and powered turns at the end. Then I came to the crow hopping stage…….


I had planned to do a lot of crow hopping, progressing from just getting the wheels off the ground to several seconds of low level flight. That’s when the runway SHRANK! About three quarters of the way down the runway my wheels left the ground and I suddenly realized there wasn’t a chance in HELL I was gonna be able to land without running into the three foot sagebrush bushes at the end of the runway. Without thinking I pushed the throttle all the way forward and there I was FLYING! About a gagillion thoughts, from holy shit to this is frickin AMAZING went thru my head in less than a nanosecond. As the adrenaline started freeflowing thru my body, the next rational thought, besides trying to just plain fly was, I gotta land her. C’mon Tink, I BELIEVE! I made two passes of my airstrip and at the end of the second pass I put her down. It wasn’t soft but wasn’t hard and it was safe! It seemed like I had been in the air for a lifetime but after watching the footage of the camera I had mounted on the wing I realized it was just under 3 minutes.

Still, longer than the Wright Brothers “first flight” so I consider myself having soloed. I had planned on doing a couple crow hops to end the practice session and then dismantle Tink before the wind came up with plans to continue later in the week when the winds died down. I really wanted to fully fuel Tink and head back into the sky to start practicing flying but
had already made the decision to shut down soon. I have found my first instincts are usually correct….


So, with a huge smile on my face I packed Tink up and my dog Moki and I headed for home.
I could not have done all this without the help of many of you in this group. I was able to get parts, advice and I have sure benefited from all of your collective experiences. Thank you all. A huge thanks to Mark and Bever!


A lot of you have been flying for a very long time. Do you remember after soloing that warm, fuzzy feeling you had in the pit of your stomach and the smile that nobody could wipe off your face! I have em both!
Bets regards!
Posted by Quicksilveraircraft at 8:05 AM 3 comments: 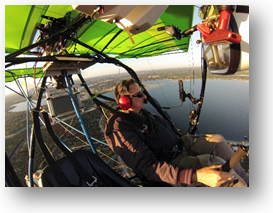 Karamitis is a Wisconsin native, and his roots in aviation go back to Oshkosh, Wis., now home of the Experimental Aircraft Association (EAA). Karamaitis’s passion for flying began back when he was less than 8 years and would spend hours sitting at the edge of the Oshkosh airport and watch airplanes taxiing and flying.  There he received his first flight by none other than Steve Wittman.

After high school, Karamitis joined the Navy as a radar operator,  where he formed a Navy flying club in Newfoundland and earned his private pilot certificate. Later at the University of Wisconsin-Oshkosh, George formed another flying club and earned his flight instructor rating in 1966. His keen interest eventually led to a flying job for Trans World Airlines, where he flew for 33 years and retired as a captain in 2001.

While working for the airlines, Karamitis was also actively involved in flying general aviation (GA) aircraft, including flight instructing. George has been an avid Quicksilver fan for more than 25 years, owning numerous models following his first Quicksilver purchase, a Sport II, in 1988. Today George operates a Sprint II that he uses for demonstration flights, and continues to instruct student pilots at Lockwood Aviation in Sebring, in a Tecnam LSA.

In 2013, the FAA's prestigious Wright Brothers Master Pilot Award was presented to George Karamitis, at the U.S. Sport Aviation Expo in Sebring, Florida. Wright Masters are honored for 50 years of flight free of accidents, incidents, or citations.

"You can't drive a car for 50 years without getting a ticket or having a fender bender, though, granted you drive more hours than you fly, but I plan to keep flying as long as I can” – G.K. –
Posted by Quicksilveraircraft at 1:22 PM 3 comments: 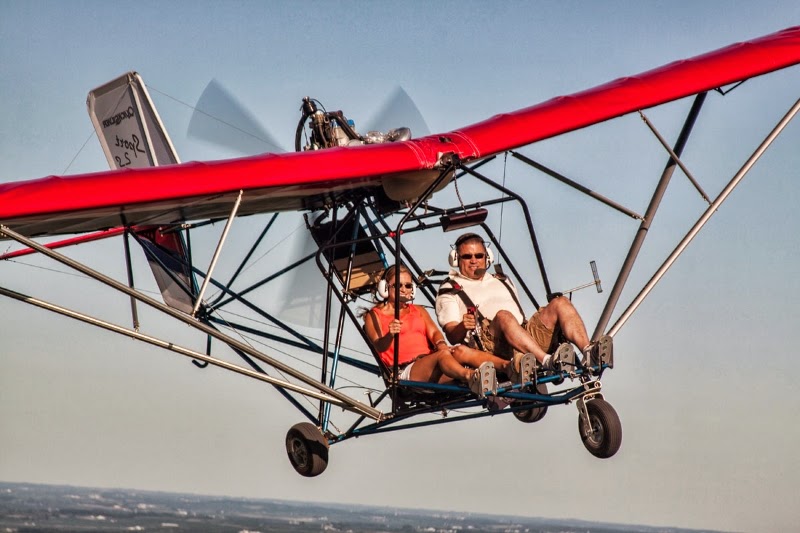 The year; 1993.  It was a cool, cloudy fall day as I flew my Quicksilver Sport11 into Green Bay’s Austin Straubel Airport. I flew there to show my Quicksilver to an old college friend who was the president of Jet Air Corporation.  The usual snide remarks were made....”Do you have a death wish flying that thing” , or “what’s an airline pilot doing flying a thing like that”  The weather turned suddenly bad and I had to leave my plane in their jet hangar.

After several days I returned to fly my Quick back home.  I was met by my friend and several other corporate officers, along with several of their mechanics.  Turns out that they were very impressed.  “Hey this has all aircraft grade hardware”,”look at the attention to detail”, “The design looks great”. And after giving several flights they were almost speechless. A few weeks latter, after a trip to Temecula, California Jet Air became a Quicksilver Distributor.

Why is all this history important?  Because Quicksilver Aircraft is on the verge of having their two place Quicksilver Sport 2S certified LSA. What does that mean to me and other pilots?  It means a huge stamp of approval.  It means that the design philosophy; the quality control, the engineering standards that Quicksilver has steadfastly adhered too will finally be rewarded. It will put an end to the death wish questions. It will give legitimacy to a product that thousands already knew was a well engineered product. It will prove correct what the folks at Jet Air already knew some twenty years earlier..

How does all this happen? You have to have the “Right Stuff” First the the right kind of people have to be in place.  Then one must have the right product.  Quicksilver had both, and continues to have the right mix.  Going way back to Dick Eipper Bob Lovejoy, and Bill Bennett with Eipper-Formance and then the name change to Quicksilver with Lyle Byrum the right people were in place. A lot of the original people have moved or passed on, but the commitment to a quality product continued.  People like Dave Gronk, Tom Price,John Lasko, Paul Mather, Chuck Whitlesy, Gene Borne, Todd Ellefson Carl Von Hirsch, and his sons, and the many dealers that gave so much,that made Quicksilver the company it is today deserve a lot of credit.

Today under the capable hands of Chief Operations Officer Daniel Perez and Quicksilver Aeronautics President Will Escutia the Sport 2S will become a true accomplishment. The Sport 2S will prove itself in the market place by giving present and future pilots a choice.  One will be able to purchase the aircraft from the factory already built and test flown.  Flight schools will be able to charge for the lessons.  And the cost for doing this will be a lot more manageable.  The “death wish” baloney will disappear.  After all, The Sport 2S  is and will be a real and proven Aircraft.

Posted by Quicksilveraircraft at 8:54 AM 3 comments:

Founded by Dick Eipper, Eipper Formance began manufacturing Quicksilver ultralights in the late 1970s when hang gliding was very popular. The Quicksilver hang gliders differed from most hang gliders of that time period in that the Quicksilver had a rigid wing and a tail with a horizontal stabilizer and a rudder. The earliest powered version, the Quicksilver C, was created as a self-launching hang glider designed to allow pilots who lived in the flatlands the ability to self-launch without a hill. The design later evolved into an ultralight aircraft for powered cross country flying.

Posted by Quicksilveraircraft at 12:42 PM No comments: